Hi, what are you looking for?

In a very delightful interview and without formalisms, Like What (it’s a persona identified only by the project name itself) talked to Plainsong about the nature of their work and their relationship with music in general ways.

First of all, congratulations on your excellent work. It’s very impressive what you’ve created especially considering that you did that on your own.

Thank you so much. It means a lot, especially when it comes from a fellow musician. Yes, I looked you up before we talk…

Thanks. So, tell us about your background. How did you start and how it is been so far? Are you enjoying the trip?

I had been working on some songs for a while but when the pandemic hit and my life turned upside down during the lockdown, I just had a lot of free time all of a sudden. Music was really one of the things keeping me busy and sane. I took some demos and decided to finish the production.

This is the very first time I published a song, I am nervous and excited, and at the same time. But I have to say, the first weeks are really beyond my expectations and I learned a lot.

What motivates you to do this work alone? It was a choice or the only way possible for awhile? And do you think it could change in the future or you rather continue exactly the way it is?

2020 has been hard for all of us and I can’t really see a change anytime soon. So for now Like What remains a bedroom project. We’ll see how 2021 will go. Fingers crossed.

Still about your process, you said in the description of the project that everything was made using an iPad and a guitar, and the recordings occurred in a bunch of odd places, including sofas, airplanes, and beds – which is crazy, but very curious and commendable. How defying is that? And is it fun or would you rather be in an expensive studio surrounded by gears and every sort of gadgets?

I used the tablet as a scratch book for music for a very long time. Mostly just for instant recording of ideas. I always planned to switch to something more ‘serious’, learn more professional software, DAW, set up a better home studio… but I kept circling back to the iPad. I can take it anywhere, a guitar and other instruments are not that portable. So I’m just kind of stuck with it.

While it sounds like a huge limitation, it can be used anytime anywhere. ‘Dark is the Night’ was really born on a flight from Budapest to New York. No guitar, no drums? There are on-screen instruments to play. The track can be finalized with a real guitar later, but the creative process is not stopped just because there’s nothing available. That’s a great advantage.

Guitar is my first instrument, I played at music schools, and in some cover bands… it will always be my favorite. Synth came into the picture very recently. And when I found myself working on songs alone, I fell in love with its versatility. I am far from being a keyboard player, I worked a lot with midi edit. The concept was to blend synths and guitar in the final sound. Some songs are more synth-heavy, some are with more guitar. I tried to balance.

Some lyricists are very confessional about their feelings. So, related to the lyrics of “Dark is the Night”, is there something personal in terms of emotional states or is it just poetry surrounded by music?

My favorite lyricists write mostly about their emotions: Kurt Cobain of Nirvana, Robert Smith of The Cure, Ian Curtis of Joy Division… I write a bit differently, my lyrics are based on movies – mostly horror and film noir. These are movies with stark imagery, which can trigger a lot of emotions. I am trying to paint these images with very few words and let the music do the rest.

You’re based in NY, which is a very important city in the music industry with a huge amount of artists coming from there every year. How do you feel the local scene for artists like you?

I have been living in the US for 6 years now, at first in Chicago and now in New York. Both cities have amazing music scenes, Chicago has the blues, New York is a melting pot of every kind of music: punk, rock, jazz, hip-hop… you name it, New York has it.

The city is full of great musicians at every level. One of my earlier bands had a rehearsal studio in the Music Building, we were playing among the same walls as Madonna, Billy Idol, The Strokes… Can you imagine how motivating it is for some hobby musicians? Even a run-down building feels like a sacred temple of rock and roll.

Is there some collaboration between artists and producers to increase the number of opportunities for underground music creators? Are there open doors for everyone?

I met really amazing people through playing or listening to music in both Chicago and New York. If we talk a year ago, I could answer this question differently, but in 2020 it’s more complicated. Live music is practically on hold. But there are quarantine videos, quarantine albums popping up frequently, musicians are trying to move to the online world… These days are not easy and everyone is just trying to find solutions.

In many cases, the hardest part of making authorial music is reaching people and gathering a fan base. How is the reception of people to your music? Do you receive feedback from your audience, yet?

‘Dark is the Night’ was the first song I published and very recently, so I don’t have much experience. I just naively put the song out there and started to think of promotions after. So unprofessional, right? I know… But as you said earlier, it’s a journey and I just try to enjoy it, learning by doing, step by step.

I know this kind of music is not mainstream and I set my expectations accordingly. But the reception is far beyond these expectations. The good thing at starting in small is that the connection with the listeners is very direct. After the first few days, I reached out to some guys who started to follow me on social media to ask them how they had found me, what they thought about the song, how the local underground music scene is in their cities… we even exchanged some music recommendations from our countries. I felt like chatting with friends in a club about music. It’s really amazing.

It’s a very cliché question, but… What are your influences? And what are you listening to nowadays?

I am listening to different kinds of music, but my main influences are Depeche Mode, The Cure, Joy Divison… But there are great bands in today’s post-punk scene as well: The Foreign Resort, all projects of Hante, Ash Code, Diary of Dreams, She Past Away, Buzz Kull… so much great music out there.

Recently you’ve put your song “Dark is the Night” on Plainsong, which is a Brazilian platform dedicated to underground music. So, do you know and listen to many Brazilian projects or even interact with them?

Brazil is really interesting, that’s the best experience of my musical journey so far! Since the very beginning, listeners from Brazil were a big part of my audience. I mean very big… almost half of the people listening to Like What are from Brazil. And I have absolutely no clue why this music resonates so well with music lovers in Brazil, what is so special about the song or the audience or just the connection between them… I really have no idea but I am amazed.

A friend of mine suggested to promote my music locally to “win at home” – and I absolutely love this idea! But then I asked myself: what is home really? It’s not always simple for a person either: is it the birthplace or the city where they are currently living in? And for music? Is it New York where I recorded the song? Or is it in Brazil, where most of its listeners are?

So I gave up trying to find the reasons, I just embraced it. If these guys in Brazil like my music, it’s best to be close to them and be part of their music community. I was very excited to join Plainsong, these kinds of initiatives are really great for independent musicians. It can spark ideas, stimulate collaborations, and help to reach a receptive audience.

I am really curious if this special connection with Brazil is just for this song particularly or the next releases will confirm the same.

Well, our time is running out, so before we finish, what would you like to say to the people who enjoy your work and what could they expect from “Like What” shortly?

Thank you for listening and keep an eye out for new releases: the second single is coming out on October 17th, followed by an EP at the end of the year.

Dark is the Night 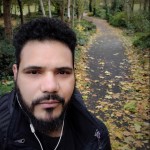